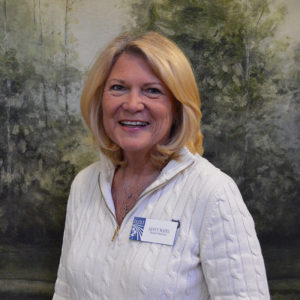 Janet Morgan Mapel grew up along the banks of the Flint River where her family’s home still sits. She graduated in 1974 from Flint River Academy in Woodbury Georgia. During her growing up years near Woodbury, she canoed the Flint many times with her dad, as he enjoyed taking family and friends for outings during the summer months. A 6-8 hr float from the farm to Sprewell Bluff was always a favorite, adding a picnic along the way. Most canoe trips centered around “putting in” or “taking out” around the farm which is located north of Dripping Rock. Her family’s mountain, Buzzard Roost, stands inside a wide curve in the river and has become sacred in a way to family traditions just as the river itself has. The summit offers gorgeous views of many miles of the Pine Mountain range that the river flows through. Unusual rock formations like Devil’s Kitchen add to the beauty of Buzzard Roost’s unique bluff ecosystem.

Janet’s father, the late Tom Morgan, Sr., was a member of the Flint Riverkeeper and was active during the 1970’s in preserving the river in its natural state, fervently hoping it would remain unspoiled. Her mom and dad also contributed to Flint River, a recreational guidebook to the Flint River and Environs. The book was dedicated to them. Janet continues to carry on the love and the emotional ties that her father instilled in her family for the Flint River. She passes those ties down to her own children and to all family friends as she leads them on hikes and paddling trips, pointing out features that make the area unique.

Janet is a retired music educator for Muscogee County (1978-2008), holding both a Specialist in Educational Leadership degree and a Master in Music Education degree. She is a current member of St. Thomas Episcopal Church in Columbus, Ga., and has served on the church vestry. She also sings in the choir. She has been vice-president and board member of the Columbus Jazz Society, and she was the recording secretary of Delta Kappa Gamma Society of Key Women Educators, Alpha Xi Chapter. Janet has been active in many other civic and community organizations because she loves to contribute to her community through worthwhile causes that speak to her heart as well as her talents. As a mother of two, she and her former husband of 25 years (now deceased) kept the children involved in music programs, scouting (a proud Eagle Scout Mom!), sports, vacations, and various other outdoor activities. The farm land along the Flint River has always been the place that anchored their lives. Her son John, 29, a SCAD graduate, is a business entrepreneur and musician, now living in Brooklyn, NY. Daughter Morgan, 25, is in Tybee Island, GA, completing a degree in Mass Communication/Spanish. She has also found the perfect man to share her life with, and is engaged to Wayne Durden.

After moving away from Woodbury, raising a family, and teaching for 30 years, Janet found that the shocking changes that have occurred to the Flint River made her aware that she needed to be involved in the preservation of the river. Janet moved back to Meriwether County and built a house to enjoy life on the farm, and be close to her mother. With time now to attend to more of her personal goals and interests, she is honored to be serving on the board. Janet and Wayne manage over 600 acres of property which she named Morgan Farm at Buzzard Roost which has approximately two miles of Flint River frontage. Janet is an active board member, attending and hosting events, and serves on the Upper Flint Water Trail committee.