Ecology of the Watershed 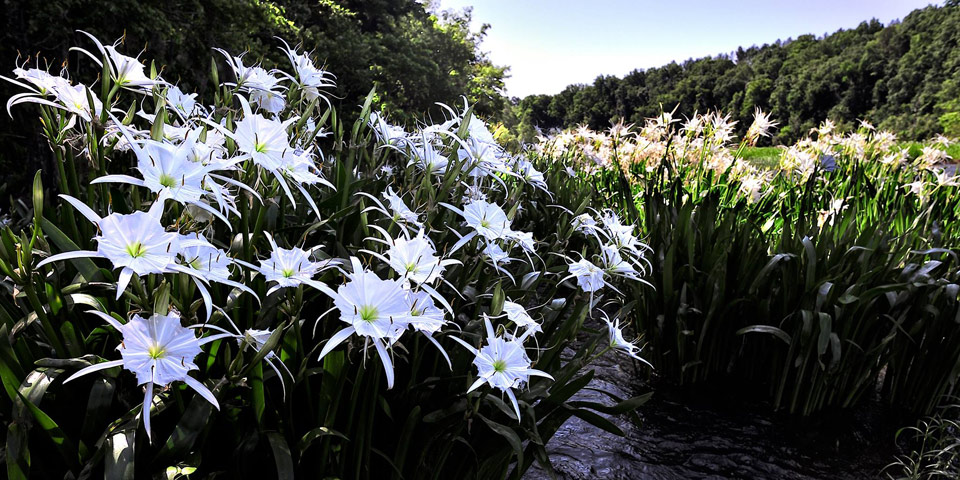 and rainwater runoff in the heart of a metropolitan area.

Yet its unimpeded flow through a network of swamps quickly work to create one of the most scenic rivers in the region supporting an extremely diverse population of flora and fauna. So much so that the Scenic Rivers Report of 1970 claimed “The upper portion of the Flint is undoubtedly the most picturesque stream in the Georgia Piedmont.” The Atlantic White Cedar Swamps of the Flint are the farthest from the coast to be found.

As the river hits the fall line of middle Georgia, the Sprewell Bluff is a dramatic backdrop for river ravines and shoals created centuries ago by a geologic shift in the landscape, and home to a variety of flora and fauna indicative of the mountains to the north and the coastal plains to the south . The shoal environment is critical to some of the Flint River’s most notable inhabitants. The shoal bass occurs throughout the Flint River and finds the free-flowing shoals of the upper Flint particularly comfortable. Fishermen throughout the region hold the Upper Flint in high esteem due to this unusual and challenging fish, as well as the scenic landscape for fishing. Also native to the Flint are the beautiful Shoals Lily, found in just a few spots in the Southeast, as well as 20+ species of freshwater mussels. Mussels are considered an indicator species to the health of a river. The Flint and its tributaries has historically held one of the most diverse populations of mussels, but it has decreased by a few species over the years.

Recently, a new species of fish was officially recognized that is found only in the Flint, Chattahoochee and Apalachicola Rivers. The Halloween Darter, or Percina crypta, is a small fish that requires a habitat of swiftly flowing water over rocky shoals. This type of environment is becoming less and less common due to dams and sediment issues in rivers of populated areas. This makes the Darter an indicator for the health of the river as well. The Flint is home to several endangered and threatened species but the Halloween Darter is most notable because of its recent discovery by Dr. Mary Freeman, Research Ecologist for the USGS Patuxent Wildlife Research Center and Institute of Ecology, UGA, and Dr. Bud Freeman, Director of the Georgia Museum of Natural History, as well as a member of the UGA water resources and conservation ecology faculty.

As the Flint leaves Lake Blackshear on the lower Flint, is settles into a broader, lazier river typical of the Coastal Plains. In combination with the upper part of the Apalachicola basin, the lower Flint basin is home to the highest density of reptile and amphibian life in the United States. The Lower Flint is home to numerous springs known as “Blue holes”, natural springs that rise from deep underground caverns in southwest Georgia. The water remains at a constant 68 degrees, an element that is essential to the striped bass and other creatures that rely on these thermal refuges in the hot summer months. Radium Springs near Albany has long been prized as one of the largest springs on the Flint and for its beauty and reported healing properties. Various caves can also be found in the lower Flint, home to the unusual Georgia blind cave salamander and the Dougherty Plain cave crayfish.