Jan. 30, 2011 – The Albany Herald, Albany, GA – An organization is fighting on several fronts to save one of Georgia's most beautiful natural wonders: the Flint River. Carlton Fletcher, metro editor Posted: 12:00 AM Jan 30, 2011
Reporter: Carlton Fletcher.

The Flint, whose headwaters begin as a trickle near metro Atlanta's Peachtree City and continue for more than 200 miles to the river's terminus at Lake Seminole on the Georgia/Florida line, has not necessarily fallen victim to such polluters as large industries built along its banks, although that is certainly an issue. This most impressive of natural wonders is being threatened instead by politicians anxious to sate an all but unquenchable thirst for water around the state's capital city, an overbuilt beast of a metropolis that demands ever more of the precious liquid, its downstream brethren be damned.

Despite promising the gathering at a campaign stop in Albany that he was no longer in favor of building reservoirs or allowing interbasin transfers among river systems to meet metro Atlanta's water needs — as he and colleague Lynn Westmoreland had proposed a few years earlier — the state's newly elected governor, Nathan Deal, has already, less than a month in office, reneged on that promise and started talking again about building reservoirs.

With most of Georgia's continued population growth migrating to the metro area, the other shareholders along the Flint — businesses, agricultural interests, landowners, commercial fisherman, outdoors enthusiasts and sportsmen — have sought a champion to voice their concerns over potential political actions that experts are saying threaten the future existence of the river.

Founded as an outgrowth of concerned stakeholders called together in 2008 by Southwest Georgia outdoor enthusiast Paul DeLoach, the Flint Riverkeeper organization was approved as a part of the Waterkeeper Alliance in June of ‘08. Following a period of organization and fundraising, naturalist Gordon Rogers was brought on in November 2009 to become the Flint Riverkeeper and lead efforts to preserve and protect the river.

"There were six or seven of us folks who lived up and down the Flint who'd get together at times, and we always wound up talking about how awful it was what was happening to our river," DeLoach, who now serves as chairman of the Flint Riverkeeper board of directors, said. "We got in touch with other folks who had interests in the river and held a meeting at Lake Blackshear.

"There were about 38 people who showed up, and they heard reports from scientists, hydrologists, DNR officials and other experts about what was happening with the Flint. We were looking for some way to take action, and one of the folks at the meeting — Rick Dove, a retired Marine from North Carolina — told us about the Riverkeeper organization. Before we left that night, we'd decided to form an organization."

With Rogers, who had served as Satilla Riverkeeper and executive director of the Satilla Riverwatch Alliance for five years after decades as a naturalist and environmentalist, heading up the new program, Flint Riverkeeper organizers knew there would be no long-range learning curve.

"We hated to pull Gordon away from the Satilla group, but we knew he was perfectly suited to lead our organization," Flint Riverkeeper board member Spencer Lee said. "He's a person who is steeped in the knowledge of our state's rivers and the challenges that our rivers face.

"The members of our organization are people who want to do everything they can to protect our river. This is one of those natural wonders we're lucky to have. There are a lot of cities and counties in Georgia that would like to lasso the river and pull it to their place."

Rogers had spent a great portion of his adult life working along Georgia's waterways. After receiving an associate's degree in biology from Oxford College at Emory University and a bachelor's degree in zoology at the University of Georgia, he worked for periods of time as a landscaper/greenskeeper on St. Simons Island, an agricultural products lab technician for Union Carbide Corp., a research/lab assistant at UGA, a fisheries statistics coordinator and fisheries biologist with the state Department of Natural Resources, a senior instructor with Wellcraft Saltwater Fishing School at Sea Island, and as a fisheries consultant/fishing guide.

"(The Waterkeeper Alliance) did not write the business model for the (Riverkeeper) organization," Rogers said. "But the concept is pretty simple. We want to identify what's wrong or what may go wrong with our rivers, figure out the causes and use any means — any ethical means — necessary to protect them.

"People read about the Riverkeeper organization and think ‘tree hugger' or ‘bunny hugger' or ‘river hugger' agenda. It's not that. This is a diverse group — from Georgia rednecks to a Carolina retired Marine to a bone-in-the-nose Californian — who are prepared to fight to protect our rivers."

Newcomb and Hill, who both have backgrounds that include management, fundraising and grant-writing in the private and nonprofit sectors, share Rogers' love for the outdoors. Newcomb and her family live on the Kinchafoonee Creek, a tributary of the Flint, while Hill spent a great deal of her childhood enjoying fishing and recreational activities along Georgia waterways with her maternal grandfather in Donalsonville.

As project manager, Newcomb has helped plan and organize such events as the "Taste of the Flint: Newton to CoveyRise" campout/adventure and the organization's signature fundraising event at Big Red Oak Plantation in Gay.

"I'd worked on projects with Paul (DeLoach) before, and when he told me about the (initial Riverkeeper) meeting I was interested in hearing what he had to say," Newcomb said. "President Carter was one of the folks who gave his vision for protecting the Flint, and when we left that meeting my husband and I were among the people ready to do anything we could to help.

"Paul later asked if I'd be interested in working with the organization part-time, and on Jan. 1 of 2010 I became a full-time employee. I got involved because there's so much of our cultural heritage tied to the Flint."

Hill had written grants for a number of nonprofit organizations when she was brought onboard as the third full-time Flint Riverkeeper staff member.

"The Riverkeeper organization receives no government grants, so we rely on donations from businesses, organizations and private families," the new mother said. "Fortunately, there is a lot of old wealth, a number of philanthropic family foundations, established in our region.

"The Flint River is a unique treasure in Georgia, and like me, there are a number of people in the state whose roots go back to the river. Education and outreach are vital to the Riverkeeper organization so that we can meet our mission and allow generations to enjoy the river long after we're gone."

For that to happen, the Flint Riverkeeper must meet challenges on any number of different fronts. In addition to legislative issues that have developed out of Atlanta's growing water needs, there is the ongoing water wars being waged among Georgia, Alabama and Florida over rights to water in Georgia-based river systems; there are ongoing efforts to fight the construction of polluting coal-fired power plants in Early County and Fitzgerald; there is the threat of acid rain associated with the plants; and there is climate change that is altering rainfall patterns in the region.

"A lot of our issues have to do with the explosion of metro Atlanta," Rogers said. "The more they paved, piped and ditched in the metro area, the quicker the water got into the river system. The hydrologic yield was much greater, so in between rains there the low levels grew even lower.

"Interbasin transfers, which are supposed to be regulated but aren't, are the primary cause for low-flow water levels being 70 percent of what they were before 1980. And there are supposed to be release prescriptions written into reservoir permits requiring that the releases be beneficial to downstreamers as well, but that's not happening."

The Flint Riverkeeper said that even though a coalition of more than 75 downstream House members and 25 senators, both Republican and Democrat, supported the organization-sponsored River Basin Protection Act of 2010, the political ambitions of opponents like Ross Tolleson, R-Perry, who held the bill up in committee, threaten favorable legislation.

"Even with his own constituents ‘beating his door down' with complaints, he kept the bill from reaching the House floor for a vote," Rogers said of Tolleson. "As for why … that's something only he can answer to you and to his maker."

Efforts to reach Tolleson for this report were unsuccessful.

Deal, too, has drawn the ire of the Riverkeeper for his plan to spend "several hundred million dollars" on new reservoirs that the organization says could damage the Flint irreparably.

"The governor is proposing to spend your tax dollars and, with bonds, that of your children and grandchsildren, on projects that are not needed and that have a 100 percent probability of degrading downstream uses and economies," Rogers wrote in a legislative preview for the Flint Riverkeeper membership, which currently is at 519 and touches some 1,600 individual members.

"Depending on where these proposed reservoirs are sited, there is also a high probability that someone's private property will be condemned via eminent domain, that fish, fishing and wildlife will be destroyed, that existing economic engines such as outfitters and riverside parks will be eliminated or damaged, and that constituencies pushing for unreasonable release prescriptions will become established."

Rogers encourages persons interested in helping with the fight to save the Flint to join the Riverkeeper organization (info at www.flintriverkeeper.org or call (229) 435-2241); to sign a "No Water Grab" petition the Flint Riverkeeper is co-sponsoring with the Georgia Water Coalition; and to contact state representatives and senators with concerns.

"This board is fully committed to protecting the Flint River, and I am proud to be part of that fight," Rogers said. "I don't want to come off as a religious fanantic, but I believe this is what God wants me to do. And I believe when you're in the center of His will, success rolls down."

The stakes in the Flint Riverkeeper's fight are frighteningly high: the very existence of one of the state's most extraordinary natural treasures. It's a fight, the group's members say, that is worthy of their efforts.

"All I have to do is stand at the window on the second floor of the (downtown Albany) Convention and Visitors Bureau," Lee, who is the Dougherty County Attorney, said. "When I look out and see that river running through the middle of Albany and Dougherty County, I'm sold. And I want to do any and everything I can to protect that river." 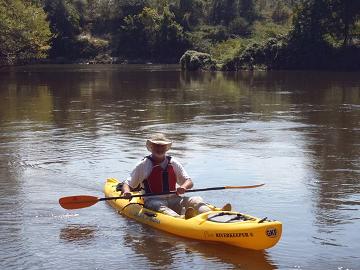