By J.D. Sumner (1263)
j.d.sumner@albanyherald.com
As of Friday, September 23, 2011
A cleanup crew from MillerCoors and the Flint RiverKeepers show off a styrofoam cooler plucked from a grassy area in the river Friday. 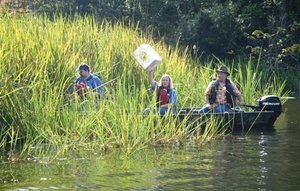 ALBANY, Ga.: — When it comes to making quality beer, clean water is vital.
Water quality is one reason why the higher-ups at Miller Brewing Company decided more than 30 years ago to build a plant here in Albany.
So, in the midst of Water Stewardship Month, the MillerCoors family joined with the Flint RiverKeepers Friday to spend the morning cruising up and down the Flint River plucking trash and debris from the craw of mother nature.
"Our quality of life really depends on water," Gordon Rogers, executive director of the Flint RiverKeepers said Friday. "Without clean water, our natural habitats die, our foodchain collapses and we as humans would struggle to survive. So it is very vital."
MillerCoors CEO Tom Jones, who came down from Chicago to participate in the cleanup efforts, said Friday that water is the key to Miller's quality product and that safeguarding water quality and protecting the environment in general is a big priority for the company.
"You can't make quality beer without quality water," Jones said. "I'm proud to be part of a corporate family that realizes the importance of keeping our natural resources pristine. You have a beautiful river here in South Georgia and the MillerCoors is committed to helping keep it that way."
While corporate environmentalism is hardly a new idea, MillerCoors and its parent Molson Coors' embrace and concern for the local environments where their plants are located is rare, especially in Georgia.
This week, a textile plant located on the Ogeechee River between Screven and Chatham Counties near Savannah agreed to pay $1 million to help reclaim portions of that river after their discharges into the river have been blamed for a massive fish kill that claimed more than 38,000 fish and obliterated species of bass and crappie along a 70-mile stretch of waterway.
It was something Rogers couldn't help but mention Friday.

MillerCoors CEO Tom Jones carries trash from a boat at the Cleve Cox boat landing Friday.
"Right down the road on the Ogeechee River there's a situation that is the exact opposite of what we have here in Albany," he said. "I'm so thankful that we have a partnership with such a strong corporate citizen like MillerCoors."
While dozens of MillerCoors employees and Flint RiverKeepers volunteers did manage to snag a couple dozen trash bags full of trash and debris from the River, David Dixon — the Albany MillerCoors Community Liason, along with Rogers, noted how little there was in the sections they were trolling.
"I can't believe there isn't more," Dixon said. "I mean, it's a good thing. But usually you can look up on the banks and just see cups and trash."
Between the RiverKeepers and Keep Albany-Dougherty Beautiful's Float the Flint events, the groups typically pull tons of debris out of the river each year — from tires to household garbage and cans.
« Return to Calendar